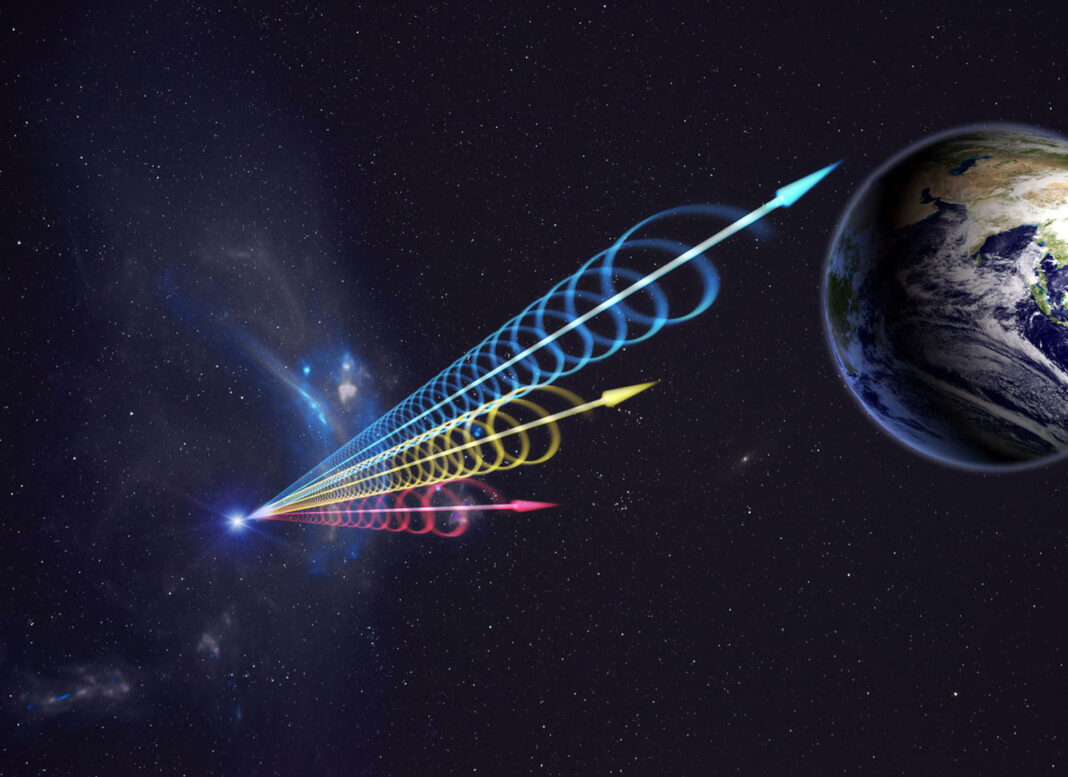 A $100 million search for intelligent aliens has spied 15 bizarre, repeating flashes of light coming from a distant galaxy.

The galaxy — a dwarf known as FRB 121102 that lies 3 billion light-years from Earth — is a known source of such brief, high-energy fast radio bursts (FRBs). But the newly detected pulses stand out, astronomers said.

“Bursts from this source have never been seen at this high a frequency,” Andrew Siemion, director of the Berkeley SETI (Search for Extraterrestrial Intelligence) Research Center at the University of California, Berkeley, said in a statement.

Siemion is a team member with Breakthrough Listen, a $100 million project that’s searching for potential signals from alien civilizations from the 1 million stars closest to the sun, the 100 galaxies nearest our own Milky Way, and the galactic plane.

Some researchers think FRBs — which were discovered in 2007 and remain mysterious today — could be such alien signals. For example, astronomers have speculated that FRBs may be generated by powerful lasers designed to blast alien craft through space at high speeds — a propulsion method akin to that being developed by Breakthrough Listen’s ambitious sister project, Breakthrough Starshot. (Aliens aren’t the only possible explanation, of course; some scientists think FRBs are likely emitted by fast-rotating neutron stars, for instance.)

So, FRB 121102 — which, as its name suggests, was discovered on Nov. 2, 2012 — was a natural target for the Breakthrough Listen team, researchers said. The scientists, led by Berkeley SETI Research Center postdoctoral researcher Vishal Gajjar, detected the 15 new pulses on Saturday (Aug. 26) using the Green Bank Telescope in West Virginia.

“As well as confirming that the source is in a newly active state, the high resolution of the data obtained by the Listen instrument will allow measurement of the properties of these mysterious bursts at a higher precision than ever possible before,” Gajjar said in the same statement.

To be clear, the Breakthrough Listen team isn’t claiming that FRB 121102’s pulses are evidence of alien life. But the new observations, and others like it, could lead to a better understanding of FRBs and other puzzling phenomena, researchers said.

“Whether or not fast radio bursts turn out to be signatures of extraterrestrial technology, Breakthrough Listen is helping to push the frontiers of a new and rapidly growing area of our understanding of the universe around us,” Siemion said.

The Breakthrough Listen project was announced in July 2015 by billionaire entrepreneur Yuri Milner and a team of scientists, including famed cosmologist Stephen Hawking.