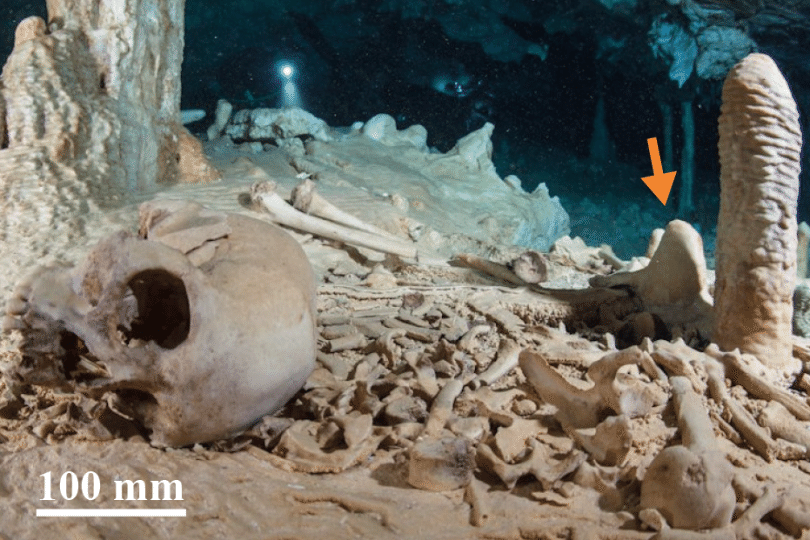 Human skeletal remains found in an underwater cave in Mexico are about 13,000 years old, providing more evidence of early human settlement in the Americas.

Scientists reported in the journal PLOS One that the bones are another piece of a complicated puzzle, as experts have had difficulty pinpointing exactly when humans first migrated to North America and spread out, settling the rest of the continent and South America as well.

This ancient human’s remains were found in a submerged cave system near the archaeological site Tulum, which is on the Yucatán Peninsula in southern Mexico, about two hours south of Cancún in the state Quintana Roo. The scientists dated the bones with the help of a stalagmite in the Chan Hol cave that was growing on top of the skeleton’s pelvis. A stalagmite is a rock that grows vertically on a cave floor, the counterpart to the stalactite that hangs down from the top of the cave. These rock features form because of the way water drips down from the cave ceiling. Rainwater makes its way down into the cave, picking up organic material along the way. While it drips down, the calcite it is carrying solidifies and builds up over time, forming the stalactite. The calcite also builds up on the ground directly below that steady drip, forming the stalagmite. Using information about how these vertical rocks grow, scientists can calculate how old they are.

According to the study, analysis shows that the stalagmite is more than 11,000 years old. An analysis of the bones themselves suggests they are even older, perhaps 13,000 years old.

The scientists say the ancient human died before the cave floor was wet, and the stalagmite formed later, after soft tissue had rotted away and the bone of the pelvis was already exposed.

“The Chan Hol individual confirms a late Pleistocene settling of Mesoamerica and represents one of the oldest human osteological remains in America,” the authors wrote.

There has been some debate about when humans first arrived in North and South America and what routes they took to migrate throughout the continents after traversing the now-submerged land bridge called the Bering Strait that connected from Siberia to Alaska. While some experts estimate that crossing happened 13,000 years ago, with dispersal through the continents following, others have pegged that crossing to 22,000 years ago.

The dating of the Chan Hol remains are right at the early limit of other recent findings. Earlier this year, scientists reported that the remains of a teenager found at Tulum, whom they nicknamed Naia, were dated to 13,000 years ago and they had found, based on evidence in her pubic bone, that she had given birth shortly before she fell into a pit and died. Her remains were discovered 180 feet down at the bottom of that pit, which is now filled with water and is known as Hoyo Negro — Spanish for Black Hole.

Naia’s nearly complete skeleton also gave her discoverers clues about what her life was like. Her teeth and long bones, like her femur, showed that she had lived through periods of famine, indicating that life was difficult for the people who first settled the Americas.

Human remains found in a cave in Mexico date to perhaps 13,000 years ago, offering some of the earliest bone evidence of ancient human settlements in the Americas. A stalagmite has grown over the person’s pelvis. Photo: PLOS One

Although carbon-dating analysis suggests these two specimens from Hoyo Negro and Chan Hol are about 13,000 years old, the authors of this new study in PLOS One caution readers that the past climate in the cave could have contaminated the fossils, making them appear older.

The scientists are calling the age of the stalagmite growing over the pelvis, which they put at about 11,300 years old, plus or minus a few hundred years, the “minimum age for the skeleton.” That would place the remains right at the beginning of the Holocene epoch, which is the current geological era. If it is older, closer to the 13,000-year-old estimate, it would be in the preceding Pleistocene epoch.

“The oldest claims for humans in the Americas is based on tools, artifacts, scraps, and very little is based on osteological remains,” according to a paleo blog post from journal publisher Public Library of Science. “When bones are found, they are often very fragmentary.”

The Chan Hol skeleton was well-preserved, even though the site was looted shortly after its discovery and most of the bones were stolen.

“This skeleton, along with other remains found in the Chan Hol cave system, could represent an early human settlement along the sea,” the post says.