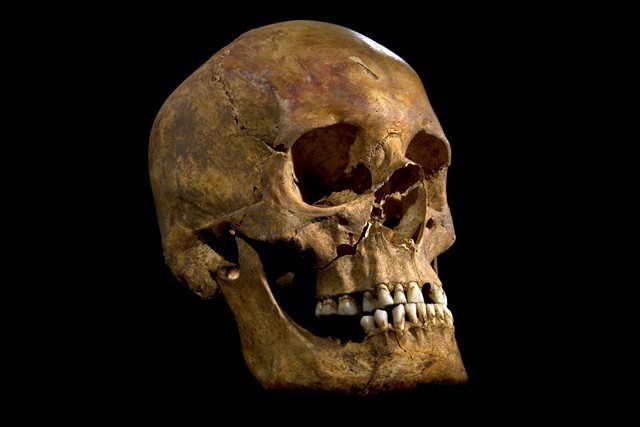 Results from the analysis of stone tools from Skhul Cave may help reveal a complex picture of how, when and where early modern humans left Africa.

A recent study* of lithic artifacts recovered decades ago from the Mount Carmel (in Israel) Skhul Cave suggests, according to the study authors, that the occupation of the Levant by early modern humans during the Pleistocene was not as simple and straight-forward as the traditionally accepted paradigm has depicted.

Archaeological and fossil finds from caves in the Levant, particularly the Skhul and Qafzeh caves in northern Israel, have often been cited as evidence to support the popular theory that early modern humans left Africa in a single wave perhaps 100,000+ years ago and occupied locations in the Levant, only to be snuffed out due to environmental change and the lack of more advanced stone tool and weapon technology before their descendants could colonize further eastward into greater Southwest Asia and the Far East. It has been portrayed as a short-lived movement, with a more successful dispersal out of Africa occurring later, around 60 – 70,000 years ago, based on the interpretation of other finds and genetic evidence. Recent findings in other parts of Asia, including the China, however, have turned up evidence for early modern human occupation in those areas that challenge the dating of the latter dispersal model by thousands of years.

Enter here a recent study of a collection of lithic artifacts from Skhul Cave, a total of 270 samples, currently housed at the Pitt River Museum (PRM), University of Oxford. In that study, Huw S. Groucutt of the University of Oxford and colleagues analyzed 56 stone cores, 85 Levallois flakes, 47 non-Levallois flakes, 81 retouched stone tools and 1 hammerstone, providing the first in-depth, complete examination and description of the assemblage using modern techniques of analysis. In the process, they also compared them to lithics excavated at other paleolithic sites and integrated their findings with the paleontological and chronometric (dating) data from previous research of the Skhul and Qafzeh caves. The latest chronological data from Skhul and Qafzeh suggests the artifacts were made and used about 130 – 120,000 and 95,000 years ago, respectively. This places the artifacts, and the early modern human fossils excavated in the caves, among the first early modern humans outside of Africa known to date.

By analyzing the artifacts within the context of finds from other sites, the stratigraphic context of the cave, and paleo-climate data, the authors hypothesize that the dispersal of and occupation by early modern humans in the Levant may have been longer and more complex than previously modeled. Write Groucutt and colleagues, “accumulating the multidisciplinary data, including the analysis of the PRM Skhul lithic assemblage we have presented, increasingly suggest that there were multiple dispersals of Homo sapiens out of Africa in MIS 5 [between 130,000 and 80,000 years ago], corresponding with humid phases, and alternating with phases of aridity.”* With this conclusion, the authors also recognize that other hypotheses could explain their results, such as the evolution of the Skhul and Qafzeh hominids from an indigenous Middle Pleistocene hominid population in southwest Asia. 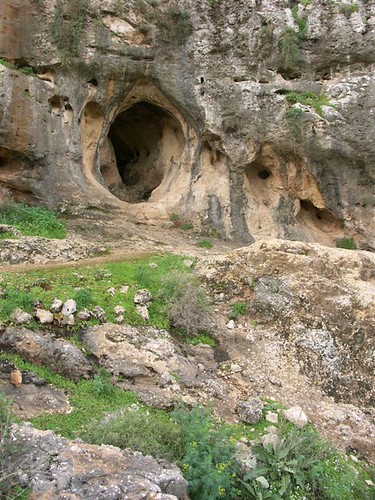 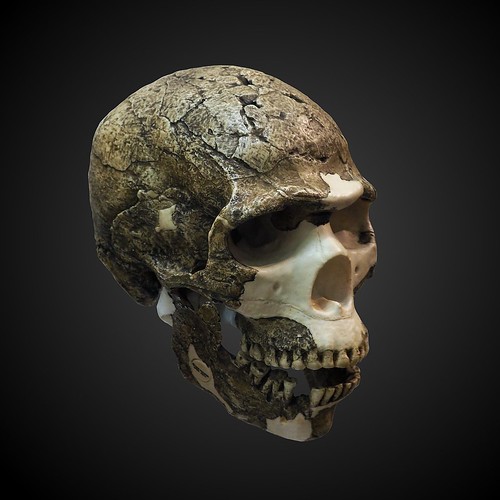 Skhul Cave was initially excavated by Theodore McCown in 1931 and 1932. Excavations eventually yielded lithic tools and other finds, including human fossil remains representing seven adults and three children, some of whom were suggested by the excavators as having been intentionally buried. In addition to the lithic tools, perforated Nassarius shells thought to have been imported to the caves from a different location were also discovered. The discoverers have suggested that these people may have collected and used them as decorative beads, a behavior distinctly more ‘advanced’ than what is attributed to much earlier hominid species. The morphological features of the fossils show characteristics identified with both neanderthals and modern humans, and though they were initially classified as neanderthals, today the generally accepted classification is that of archaic (early) modern human. The specimens are thought to represent some of the earliest modern humans to occupy regions outside of Africa. The finds in both the Skull and Qafzeh caves provide evidence to support the theory that early modern humans and neanderthals lived concurrently in Eurasia for a time, and may even have interbred in the Levant.

Although the initial investigations at Skhul in the 1930’s employed techniques and methodology that are considered inadequate by modern standards, and the collection analyzed does not represent the complete assemblage of all lithics recovered from the site, Groucutt and colleagues determined nevertheless that the artifact sampling met the requirements for making some valid observations and drawing conclusions for a hypothesis worth testing at other digs and through future studies. “We have described the Skhul lithic assemblage acknowledging its limitations in terms of excavation methods and so on, and formulated hypotheses that can be tested by multidisciplinary analyses of new sites,” the study authors concluded.*

The detailed study paper will be published in the Quaternary International scientific journal.