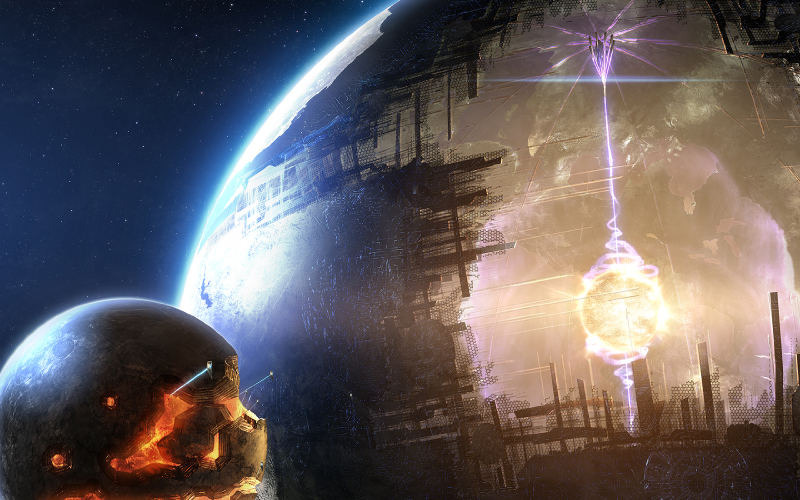 Down here on Earth, scientists around the globe are constantly watching, observing, measuring and trying to figure out just what the heck is going on in the vast Universe beyond our reach.

And 2017 has been an incredibly exciting year for space science – so here are some of the stories that really had us wowed.

We just gotta call it – this is absolutely jaw-droppingly good and probably won’t be topped by anything short of the first photographs of a black hole’s event horizon.

Gravitational waves were able to help pinpoint the collision between two neutron stars, allowing us to take optical observations as it was happening (and directly measure the speed of gravity). This is HUGE – you can read up on the implications here.

We had an interstellar visitor

Asteroids and comets in the Solar System are nothing new – astronomers observe them all the time. But this one was special – for the first time ever, scientists observed something, either an asteroid or a comet, inside our Solar System but originating from elsewhere.

And it turned out to be even more amazing once we started studying it – a strangely-shaped asteroid with an icy core that has probably been flying through space for hundreds of millions of years.

Astronomers measured the farthest distance yet across our own galaxy

It’s actually really hard to figure out what the Milky Way galaxy looks like from our vantage point on the inside – which meant it was pretty exciting news when astronomers were able to measure the distance to a group of stars 66,000 light-years away on the other side of the galaxy.

That nearly doubled the previous measurement record of 36,000 light-years!

Tabby’s Star got even weirder

KIC 8462852, also known as Tabby’s Star, has been confounding scientists since its discovery in 2015 – and continues to do so.

This year, researchers discovered that the star, which exhibits a dimming pattern never seen anywhere else before, has been doing so for longer than we thought – which poses significant problems for all the current hypotheses. We got nothing, watch this space.

Humans are going back to the Moon!

But the Moon won’t be lonely for much longer, according to US Vice President Mike Pence, who announced this year that the US government is sending people back up there. We’re packing our Moon boots already.

We got a lead on fast radio bursts

Fast radio bursts are one of the Universe’s most puzzling mysteries. They’re extremely powerful radio signals that last just milliseconds, and they can’t be predicted or, usually, pinpointed.

This year, we received repeating bursts from one location for the first time, and then a second time, allowing us to track where they came from. We still don’t know what they are, but we’re getting closer.

For 13 years, Cassini was the little Saturn probe that could, orbiting Saturn and sending back unprecedented amounts of data about the ringed planet and its wacky moons.

On 15 September, its mission came to an end, and it plunged down into the depths of Saturn – hard at work until its last moments.

The Sun had a party

Our own local star has been having a blast up there – quite literally. It spat out the biggest solar flare we’ve seen in 12 years, powerful enough to interfere with communication technology on Earth and cause gorgeous auroras.

And in August, the US saw its first full solar eclipse across the entire country since 1918.

Over 100 years after Einstein published his theory of general relativity, scientists are still finding out he was right about many, many things.

This year, astrophysicists calculated that deviation in the orbit of a star around a black hole was not consistent with Newtonian theory – but it totally fit with Einstein. If he was still around, we would high-five him so hard.

Thanks to the discovery of gravitational waves, we know that binary black holes exist, but the idea of a binary supermassive black hole was only theoretical – until this year.

Einstein said this was impossible due to the scarcity of stars in the correct alignment.

But, thanks to the gravitational lensing effect he predicted, and combined with the Hubble space telescope’s angular resolution, astronomers found the one-in-a-million alignment of stars that allowed them to weigh a star using gravity for the first time ever.

TRAPPIST-1 fever sort of came and went, but for a while there, it was the solar system on everyone’s lips: seven planets orbiting an ultra-cool dwarf star, our “sister solar system” looked like a pretty good candidate for life.

Then it was discovered that maybe those planets aren’t so hospitable after all. Then researchers discovered that, wait! They might be! It’s been a real rollercoaster and we just don’t know what to believe any more, but it sure has been fun.

TRAPPIST-1 isn’t the only basket for our alien-hunting eggs. There was also the discovery of LHS 1140b, a planet about 40 years away that shows promise as one of the best candidates yet.

And in November, astronomers announced the discovery of Ross 128 b, an Earth-like planet just 11 light-years away, from which mysterious signals were detected earlier this year (they could have been interference from Earth, so let’s not get too excited).

We’re going to have to wait a while to find out if either planet has biomarkers, but still! Exciting!

We can’t see black holes, but maybe we can photograph them. This year, scientists around the world pointed a collective of telescopes – called the Event Horizon Telescope – at a black hole for five nights of observations.

Their goal was to see if they could finally, for the first time, get a picture of the event horizon of a black hole.

We’re still waiting on the result, and we’re on the edges of our seats. Hopefully we’ll get to see it sometime early next year.

More: 14 Ways Our Perception of The Universe Changed Forever in 2017