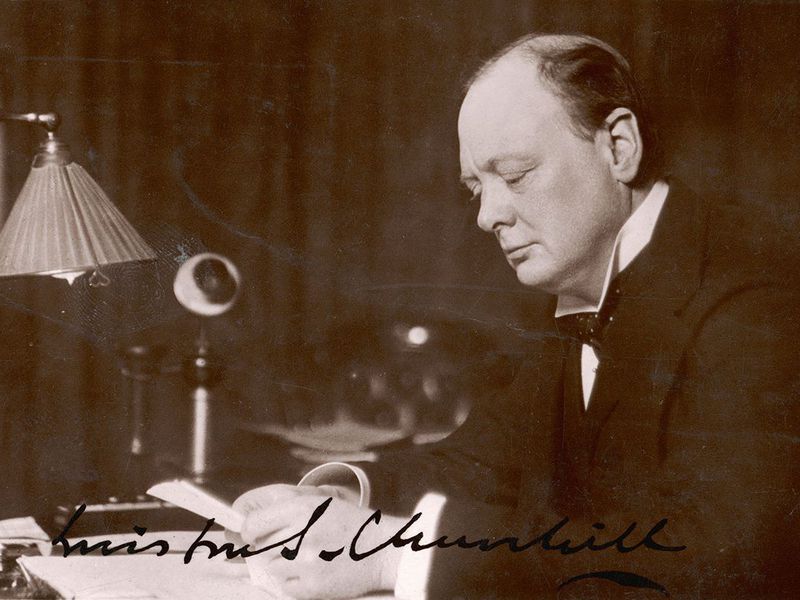 Winston Churchill was known for his leadership during World War II, but a newfound essay on alien life reveals another side of him, one that was deeply curious about the universe.

“I, for one, am not so immensely impressed by the success we are making of our civilization here that I am prepared to think we are the only spot in this immense universe which contains living, thinking creatures,” he wrote in the newly uncovered essay, “or that we are the highest type of mental and physical development which has ever appeared in the vast compass of space and time.”

Besides being prime minister of the United Kingdom during the tumultuous years of World War II, the British statesman was also a prolific writer and proponent of science. In fact, he was the first prime minister to have a science advisor. Those traits converged in the newfound 11-page essay about the search for alien life, discovered at the Churchill Museum in Fulton, Missouri. It was first written in 1939 and was slightly revised in the late 1950s. [5 Bold Claims of Alien Life]

The museum’s director, Timothy Riley, showed the document to astrophysicist Mario Livio, who described the work and Churchill’s approach to science in an article published today (Feb. 15) in the journal Nature. Churchill’s essay was titled “Are We Alone in the Universe?”.

“I was amazed to see the title of this article, first of all,” Livio, head of the Institute Science Division at the Space Telescope Science Institute, told Space.com. “And then I read it and was even more astonished, because I saw that this great politician is musing about a real scientific topic, an intriguing scientific topic, [and] he is reasoning about this in the same way that a scientist today would go about it.”

Churchill was not a scientist, and when the politician composed the essay, Europe was on the brink of war, Livio said.

“And yet, at that time, he finds the time to contemplate such issues and think about things so clearly,” Livio added.

Evaluating the likelihood of life

In the essay, Churchill first set out to define life, characterizing the most important quality as the ability to reproduce. He chose to consider “comparatively highly organized life,” which Livio said is probably multicellular life. Churchill likely did this to avoid ambiguity for things like viruses, which are able to replicate but exhibit other characteristics that aren’t terribly lifelike, Livio said.

Then, Churchill discussed where to look for life: in places with liquid water (or where liquid water can persist, which is what scientists now call the “habitable zone” around stars).

“Then, he says, OK, once we’ve defined life, what are the necessary ingredients for life to exist? And he identifies liquid water as one such ingredient,” Livio said. “And that’s exactly what we do today. Our searches for life in the universe today are primarily guided by liquid water.”

In his essay, Churchill considered the solar system, deciding that only Mars and Venus could have fulfilled those conditions. The outer planets are too cold, Mercury is too hot on one side and too cold on the other, and the moon and asteroids have gravity too weak to trap the atmosphere, Livio wrote, summarizing Churchill’s argument.

Then, Churchill discussed the possibility of planets outside the solar system — exoplanets — which had not yet been discovered. The model he considered, described by astrophysicist James Jean in 1917, predicted that planetary formation is very unlikely to occur. (The theory, which proved incorrect, described planets forming by the gas torn from a star when another star passes by it.)

“But the beautiful thing is, then he says, But wait! Maybe this theory is wrong! Why should we think that this theory is correct?” Livio said. Churchill added that the abundance of double stars suggests that planetary systems could form commonly.

In the article, Livio quoted Churchill’s essay: “I am not sufficiently conceited to think that my sun is the only one with a family of planets.” Churchill went on to posit that a large fraction of those planets would be the right size to keep water on their surface and maybe an atmosphere, and that some would be at the right distance from their stars to maintain a life-friendly temperature.

“This chain of logic is astounding, in my opinion, for a politician,” Livio said.

Livio said Churchill saw value in science, but the statesman took a nuanced approach. He understood that science was necessary to win the war effort, but also established an atmosphere in which science was important in its own right, and he wanted it to be used to improve the world.

“As a result of that, in the 1950s, came all these great discoveries,” Livio said, citing milestones like finding the structure of DNA and developing radio astronomy, which stemmed from work on radar. “Once you generate the framework and the infrastructure for science to thrive, then a variety of discoveries come.”

But Churchill also emphasized that science should work to advance humanity, Livio said.

“Later in life, he also understood that one cannot do the science in what he would call a moral vacuum,” Livio said. “You need to embed all the scientific research and discoveries also in the context of human values, and an understanding of the human condition.”

“All of those [concerns] require serious scientific input, so there must be the mechanisms in place to get that scientific input, and the correct scientific input — which means science advisors at high levels, and involvement of scientists in a variety of decisions concerning some of those challenges,” Livio said. “It certainly doesn’t help to shun sciences; some of these problems can turn into disasters if nothing is done.”

As for the likelihood of life on other planets, over the past 20 years, scientists have discovered thousands of planets orbiting other stars and have made large strides in determining these worlds’ characteristics remotely. But researchers have yet to discover definitive signs of life elsewhere in the universe, or to visit other planets in person to hunt for life. However, Churchill didn’t want to put bounds on what advancing science or technology might bring, Livio said.

“When he discussed the possibility of traveling to other planets and things like that, he says, well maybe this isn’t possible today but, he says, ‘It is rash to set limits to the progress of science,'” Livio said. “Things that are not possible today, you shouldn’t think that they would not be possible in the future.”