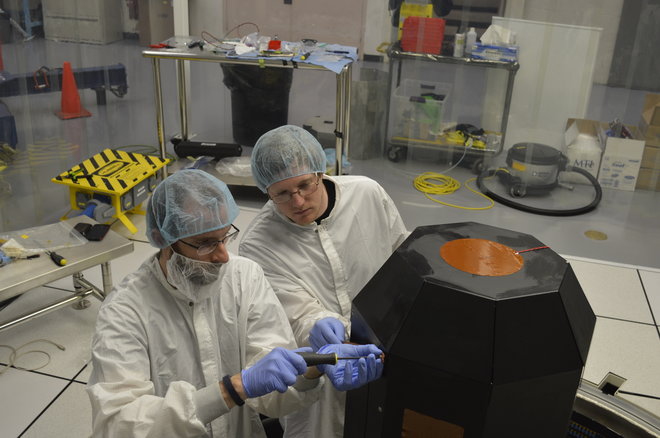 MOFFETT FIELD, Calif. — Made In Space just took another step toward its goal of building telescopes and other large structures off Earth.

A 3D printer built by the California-based company churned out multiple polymer-alloy objects — the largest of which was a 33.5-inch-long (85 centimeters) beam — during a 24-day test inside a thermal vacuum chamber (TVAC) here in Silicon Valley at NASA’s Ames Research Center in June.

The milestone marks the first time a 3D printer has created “extended structures” in a space-like environment, Made In Space representatives said here Thursday (Aug. 10) during a press event announcing the success of the June test. (The TVAC imposed the temperatures and vacuum of space, though standard Earth gravity remained.)

“This is an important milestone, because it means that we can now adaptively and on demand manufacture things in space,” said Made In Space CEO Andrew Rush. “We have significantly de-risked that technology.”

Made In Space has already demonstrated zero-G printing; the company built the two 3D printers aboard the International Space Station. (NASA owns one of the machines, and Made In Space owns the other, operating it as a commercial facility.) But both of the ISS printers are kept inside the station, so they don’t experience the vacuum or extreme temperature fluctuations of space.

The printer that aced the June test is a component of Archinaut, a robotic system that Made In Space is developing under a NASA “tipping point technologies” contract. Archinaut will also feature robotic arms, which will work with the 3D printer to build and assemble structures in the final frontier. (At Thursday’s event, Made In Space gave a demonstration of one such robotic arm autonomously grabbing a small beam and inserting it in its proper slot. Photos were not allowed, or you’d be seeing some in this story.)

Such technology will allow for the design and manufacture of much larger and more ambitious spacecraft, since they won’t need to fit inside a rocket’s nose cone and survive the rigors of launch, NASA officials said.

“We do believe that in-space robotic manufacturing and assembly is going to revolutionize the way we design and deploy and operate systems in space,” Steve Jurczyk, the head of NASA’s Space Technology Mission Directorate, said at Thursday’s event.

Archinaut “could enable a wide range of in-space manufacturing and assembly capabilities,” he added.

One such potential capability is the construction of much larger space telescopes. Jurczyk pointed to the example of NASA’s much-anticipated $8.8 billion James Webb Space Telescope (JWST), which has a primary mirror 21.3 feet (6.5 meters) wide.

JWST will be so compacted for its November 2018 launch that it will take more than 80 separate deployment operations after liftoff to get the scope ready to observe the heavens, Jurczyk said. Such a strategy could work for a space telescope with a mirror up to 26 feet (8 m) or so wide, he added. But NASA wants to build even bigger scopes, ones at least 39 feet (12 m) wide, to hunt for signs of life in exoplanet atmospheres and perform other ambitious observations.

“That mission is just not doable right now, given the current launch vehicles and trying to fold things up and fit them in a launch vehicle shroud, in a single launch,” Jurczyk told Space.com. “It would take multiple launches of partially assembled systems, which would be expensive.”

Archinaut would make things much easier and cheaper, he added: Mission managers would just have to launch feedstock material to the three-armed spacecraft, which would build the telescope in orbit.

July 26, 2017
An excavation in the Dargeçit district of the southeastern region of Turkey, which will soon be left under the reservoir waters of the Ilısu...