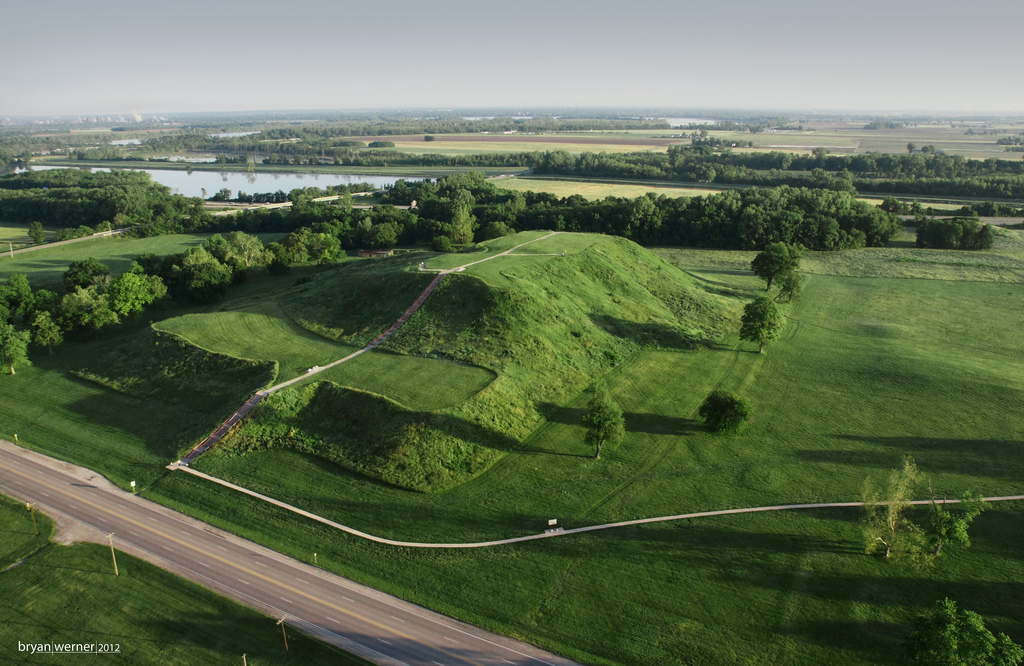 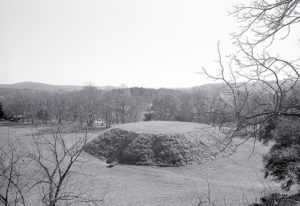 PHILADELPHIA, PA 2017—The Great Pyramids in Egypt, Stonehenge in England, and the Maya city of Teotihuacan were all built thousands of years ago. Add to that list of extraordinary achievements the earthen mounds—some rising to heights of 70 or 100 feet, some more than 5,000 years old—that dot the landscape of North America.

Moundbuilders: Ancient Architects of North America, a new exhibition opening June 24 at the Penn Museum in Philadelphia, tells the sometimes enigmatic story of more than 5,000 years of Native American moundbuilding through photographs, archival excavation records, and more than 60 artifacts excavated at mound sites throughout the eastern United States. The exhibition runs through December 2017.

Earthen mounds—including some of the earliest monumental constructions in the world— have been engineered by diverse Native American groups over millennia. Yet the sizes, shapes, and purposes of mounds have varied greatly over time and geographical distance. Mounds have played and continue to play important roles in the religious, social, and political lives of Native American people. Some have been burial mounds; others have been centers of trade and community gatherings; still others have served as the foundations for important buildings or activities.

Archaeologists, fascinated by the extraordinary engineering feats of the moundbuilders, have been excavating and mapping this tradition since the 18th century. To date, many thousands of mounds have been discovered, from those at Cahokia, the massive Native American city outside Saint Louis, Missouri, to smaller mound sites like Smith Creek in Mississippi where the Penn Museum currently excavates. Over time, many mounds have been destroyed by farmers or leveled due to urban expansion; many more are believed to exist, not yet discovered.

Moundbuilders explores the changing patterns of the construction and use of Native American mounds through time, beginning with the earliest known mounds, built by small groups of hunter-gatherers in the Lower Mississippi Valley as early as 3700 BCE. Without the help of metal tools, these early mound builders worked by hand moving basket loads of dirt. By 1400 BCE, the Poverty Point site in Louisiana was home to mounds that required thousands of laborers. In addition, exquisitely carved stone artifacts uncovered at the site suggest specialized artisans and an extensive trade network for materials.

Moundbuilding became much more common in later years. These constructions began to serve as burial places and certain burials were accompanied by elaborate grave goods. Some sites, like those associated with the Hopewell culture in Ohio (1 to 400 CE), included huge geometric enclosures that served as ceremonial centers for the surrounding populations. Around 600 CE, dramatic shifts in moundbuilding practices occured. In the Upper Mississippi Valley, people built thousands of effigy mounds in the shapes of animals. Further south, flat-topped platform mounds were built, serving as foundations for structures or stages for public activities.

Platform mounds were the most common mound form in the centuries leading up to European contact when corn agriculture developed and people congregated in major cities ruled by powerful chiefs.  Though moundbuilding had largely ceased, some of these sites were still occupied when Europeans visited them in the 16th and 17thcenturies. A small renaissance of moundbuilding has begun today, as the Eastern Band of Cherokee Indians continues to construct the Kituwah mound in the mountains of North Carolina.

Artifacts from the Mounds

The exhibition includes excavated artifacts made from a variety of materials, including stone, such as the intricately carved underwater panther boatstone believed to be used as a weight on a spear thrower; ceramic, such as pots formed in the shape of human effigy figures; and shell, such as pendants from Key Marco, Florida. These latter objects bear sacred designs associated with the Southeastern Ceremonial Complex—a system of signs and symbols shared among different groups living hundreds of miles apart ca. 1000 – 1500 CE. In addition, visitors have an insider’s view into modern-day mound excavation through video footage of Dr. Kassabaum and her students excavating at Smith Creek in 2015. A case displaying hundreds of artifacts recovered on that expedition gives the visitor a sense of what most archaeological material looks like right after it is excavated. 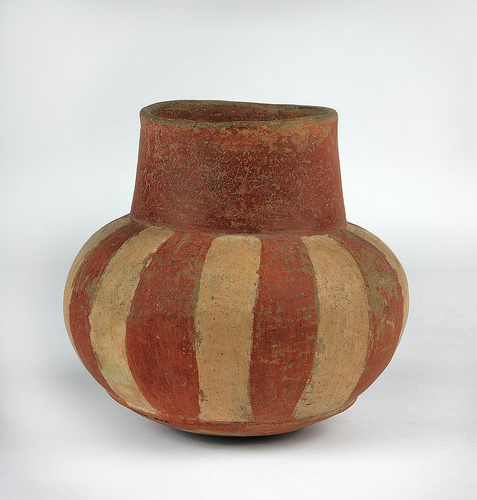 Clay jar. 1200–1500 CE (Mississippian). Arkansas, Montgomery County. This ancient Mississippian Period ceramic jar, 17 cm tall by 18.5 cm wide, is from Arkansas. The style of decoration can help archaeologists determine when and where a pot was made, and the shape and size of the vessel can point to the types of activities taking place at the site. Image courtesy Penn Museum