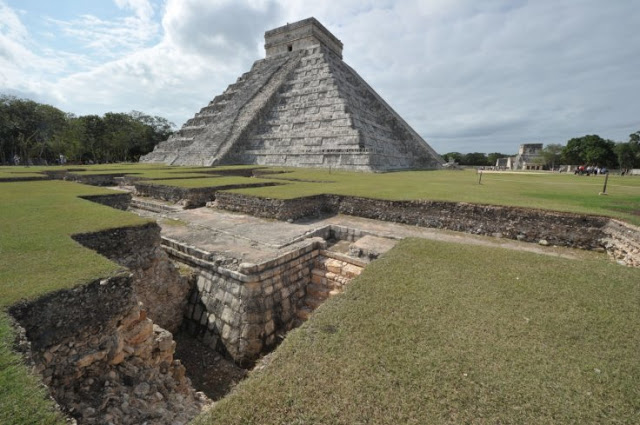 Researchers have discovered a secret passageway in the Temple of Kukulkan in Mexico’s Chichen Itza that could reveal clues about the ancient civilisation’s underworld beliefs.
The Great Mayan Aquifer Research Project team led by underwater archaeologist Guillermo de Anda, has been investigating a labyrinth of tunnels inside the Mesoamerican step-pyramid, which has led to the passage presumed to be the pathway to an unexplored underwater cave below.
Experts had discovered the presence of a sinkhole or cenote under the structure in 2015, using ground penetrating lidar, a form of radar. With the help of electromagnetic signals they were able to scan the temple and map the underground structures as well.

“Through the Ossuary, we can enter the cave beneath the structure and there we found a blocked passageway, probably closed off by the ancient Mayans themselves,” de Anda told El Universal in an interview. “We will enter again and this time we will try to open it to see if the passageway leads us to the entrance of the cenote beneath the pyramid.

“First we want to prove that it exists because no one has seen it, we only have the images; then we’d have to explore it,” he added.

The team is hopeful that the new information could help offer more clues regarding Kukulkan, the feathered snake deity for whom the temple was built. Local legend claims the hidden cenote was used to make human sacrifices and is expected to reveal more about the pre-Columbian Maya civilisation’s notions of the afterlife.

“With this data, I believe we will conclusively find out if the local legends of an elaborate underworld are true,” de Anda told the National Geographic in September. “They believed that everything from fertility to rain and lightning originated in this subterranean world. The clues they left behind make it clear that they went to great lengths to appease and appeal to the dwellers of this spirit world.”