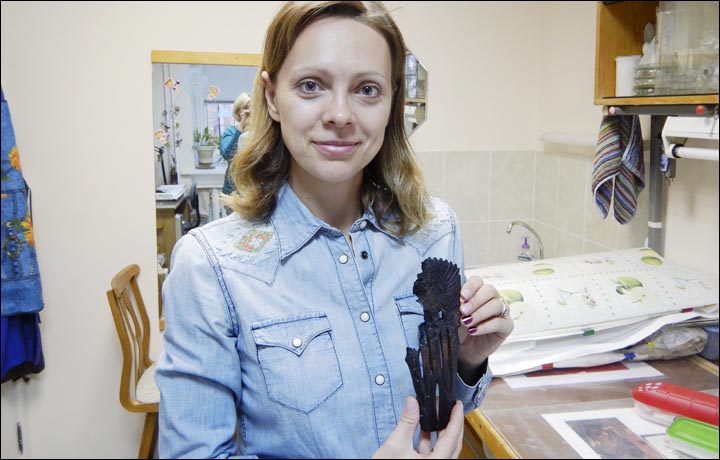 ‘Absolutely stunning’ ancient ornaments discovered with no known comparisons, presenting a puzzle for archeologists: which culture made this?

The finds were made on a pre-historic burial site Turist-2 close to the east bank of the Ob River in Novosibirsk.

The most sensational is a figurine made of an as yet unknown organic material featuring what appears to be a feather headdress.

Or could it be a halo atop the head of a deity?

Researchers will now work hard to decipher the meaning of this intriguing relic. 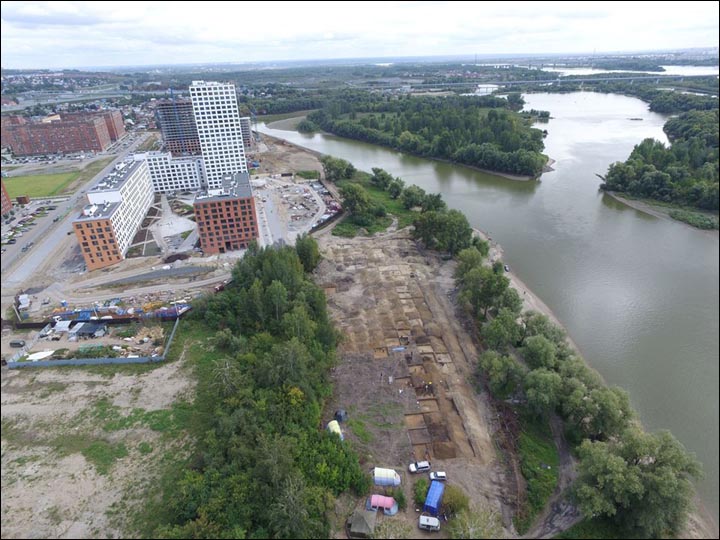 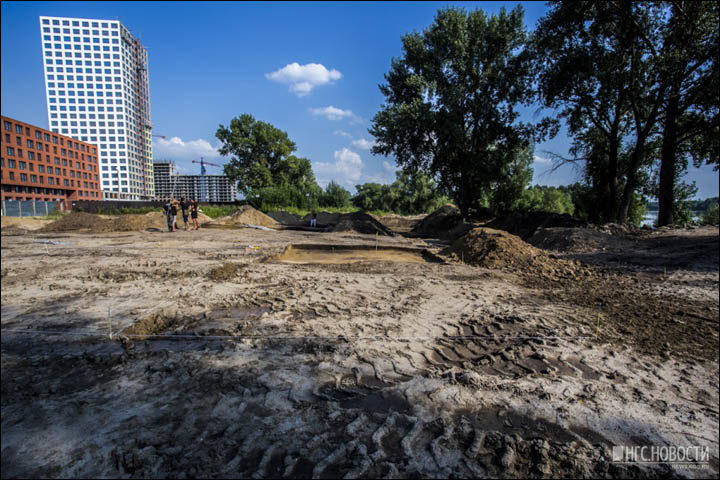 On the place of an old potato field were found Neolithic and late Bronze Age settlements, Bronze Age burial site and a single burial of Turkic time. Pictures: Institute of Archaeology and Ethnography SB RAS, NGS.ru

‘We found a figurine of a bird made of bone, and most likely it was sewn onto clothes or was a kind of pendant,’ she said.

‘There were four anthropomorphic figurines, made of mammoth tusk, sandstone, birch burl and an unknown organic material, which needs to be checked. 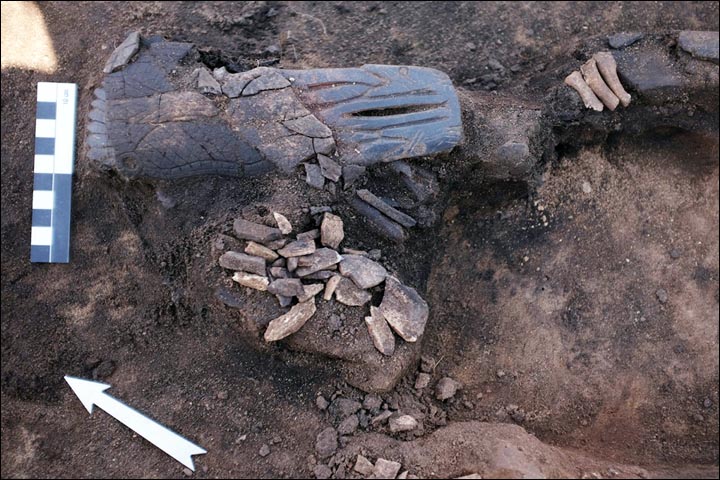 The figurine was made of an as yet unknown organic material. Pictures: Institute of Archaeology and Ethnography SB RAS

‘The anthropomorphic figurines were most likely sewn onto clothes as they have holes.

‘There is also a figurine of a moose, made of shale, but we are not sure if we can attribute it clearly.

‘We found the figurine in the wall of an excavation hole, not in a burial.’

This figurine is now restored and was probably used for ‘ritual purposes’, she said.

In male burials, archeologists uncovered belt buckles made of bone and small sculptures, including anthropomorphic.

The preliminary dating of the site is up to the end of the third millennium BC, but stone implements were found from the Neolithic Age, possibly as old as the fourth millennium BC.

Found too was a  late Bronze age settlement of Irmen culture and medieval burial from Turkik times.

The main ancient burial ground is probably from the Krotovo culture from the middle Bronze Age but the experts want more time to assess.

The finds are likely to find their way to Russia’s premier museum, the St Petersburg Hermitage .

Professor Molodin said of the figurines:  ‘The finds are absolutely unique. This is most likely the third millennium BC. 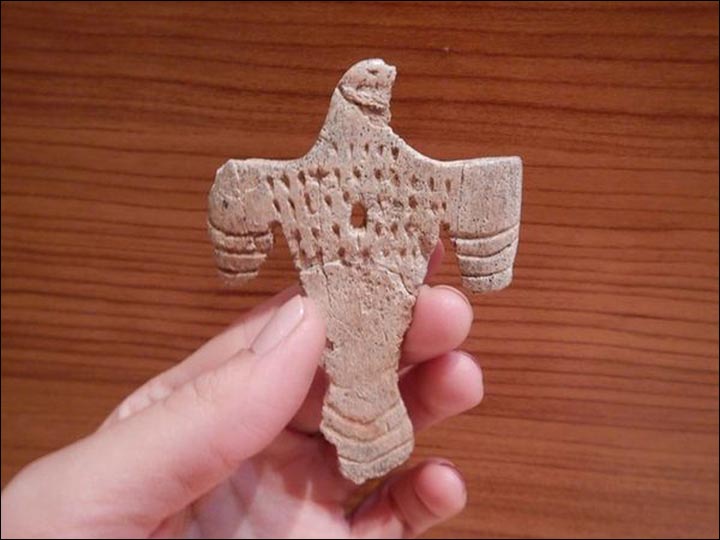 Figurine of a bird made of bone, most likely it was sewn onto clothes or was a kind of pendant. Picture: Institute of Archaeology and Ethnography SB RAS

‘According to the iconography of images, they are similar to the Okunev or Samus culture.

‘But the first did not reach our territories, and the second has a completely different funeral rite.

‘By funeral practice,this is without a doubt is Krotovo culture.

There are no parallels  to the objects that have been found.

‘They are absolutely stunning and, without exaggeration, worthy of the St Petersburg Hermitage Museum. 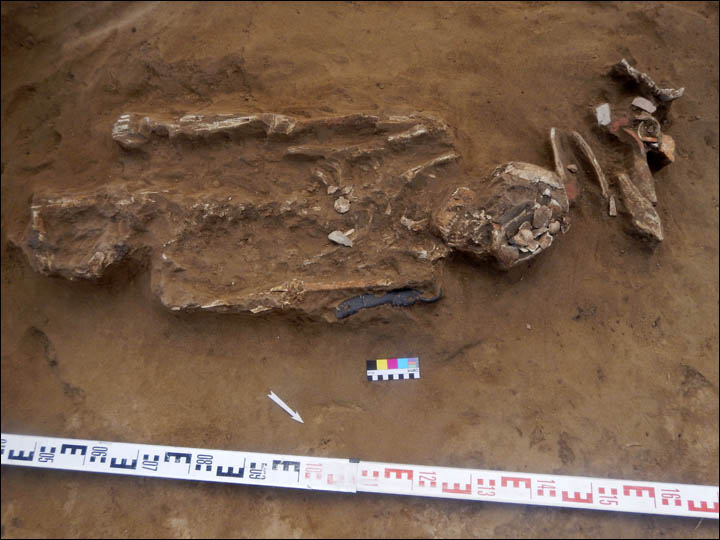 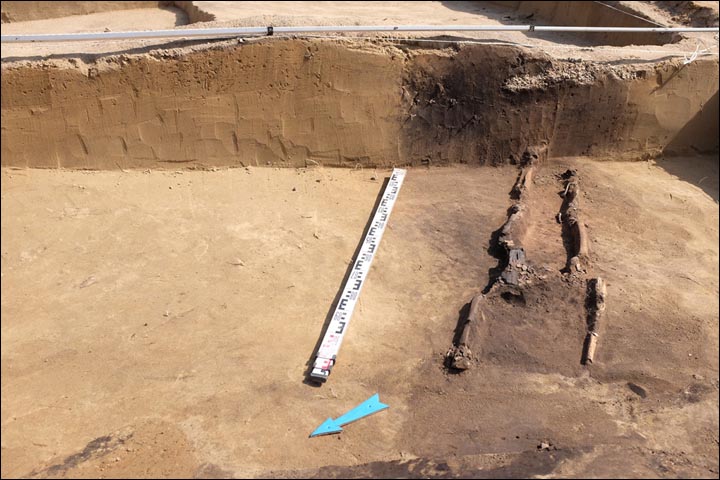 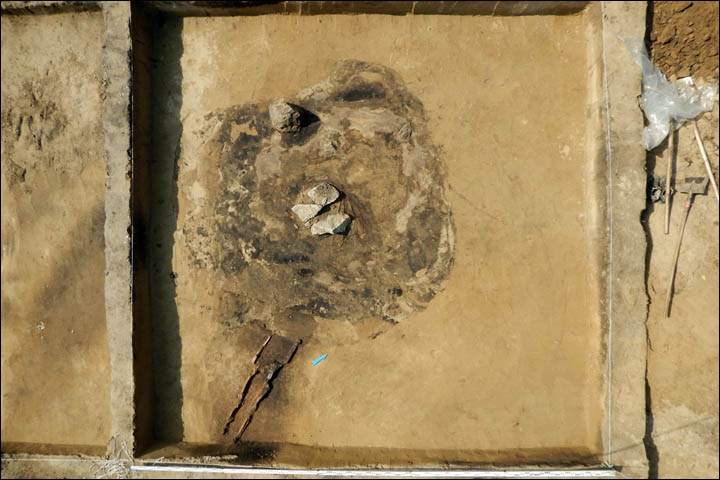 ‘By funeral practice,this is without a doubt is Krotovo culture.’ Pictures: Institute of Archaeology and Ethnography SB RAS

‘I am sure that experts will examine  them more than once.’

The excavations are more complex because the natural layering of the soil was disturbed by a giant wave that washed over the site – called Tourist-2, some 4,000 years ago. This was caused by an earthquake, say geologists.

In more modern times it was a potato field before soil was removed to ‘beautify the city’.

The debris from construction sites was dumped here. The river was also dredged and the silt put on this site.