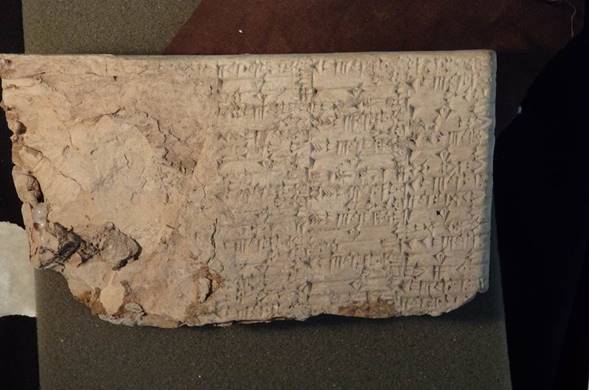 Earlier today, the United States filed a civil complaint to forfeit thousands of cuneiform tablets and clay bullae. As alleged in the complaint, these ancient clay artifacts originated in the area of modern-day Iraq and were smuggled into the United States through the United Arab Emirates (UAE) and Israel, contrary to federal law. Packages containing the artifacts were shipped to Hobby Lobby Stores, Inc. (“Hobby Lobby”), a nationwide arts-and-crafts retailer based in Oklahoma City, Oklahoma, and two of Hobby Lobby’s corporate affiliates. The shipping labels on these packages falsely described cuneiform tablets as tile “samples.”

The government also filed a stipulation of settlement with Hobby Lobby, in which Hobby Lobby consented to the forfeiture of the artifacts in the complaint, approximately 144 cylinder seals and an additional sum of $3 million, resolving the civil action. Hobby Lobby further agreed to adopt internal policies and procedures governing its importation and purchase of cultural property, provide appropriate training to its personnel, hire qualified outside customs counsel and customs brokers, and submit quarterly reports to the government on any cultural property acquisitions for the next eighteen months.

“American collectors and importers must ensure compliance with laws and regulations that require truthful declarations to U.S. Customs and Border Protection, so that Customs officers are able to scrutinize cultural property crossing our borders and prevent the inappropriate entry of such property,” stated Acting United States Attorney Rohde. “If they do not, and shippers use false declarations to try to clandestinely enter property into the United States, this Office and our law enforcement partners will discover the deceit and seize the property.” Ms. Rohde thanked U.S. Customs and Border Protection for its role in intercepting shipments and safeguarding the seized antiquities.

“The protection of cultural heritage is a mission that HSI and its partner U.S. Customs and Border Protection (CBP) take very seriously as we recognize that while some may put a price on these artifacts, the people of Iraq consider them priceless,” stated Special Agent-in-Charge Melendez.

According to the complaint and stipulated statement of facts filed with the court, in or around 2009, Hobby Lobby began to assemble a collection of historically significant manuscripts, antiquities and other cultural materials. In connection with this effort, Hobby Lobby’s president and a consultant traveled to the UAE in July 2010 to inspect a large number of cuneiform tablets and other antiquities being offered for sale (the “Artifacts”). Cuneiform is an ancient system of writing on clay tablets that was used in ancient Mesopotamia thousands of years ago.

In October 2010, an expert on cultural property law retained by Hobby Lobby warned the company that the acquisition of cultural property likely from Iraq, including cuneiform tablets and cylinder seals, carries a risk that such objects may have been looted from archaeological sites in Iraq. The expert also advised Hobby Lobby to review its collection of antiquities for any objects of Iraqi origin and to verify that their country of origin was properly declared at the time of importation into the United States. The expert warned Hobby Lobby that an improper declaration of country of origin for cultural property could lead to seizure and forfeiture of the artifacts by CBP.

Notwithstanding these warnings, in December 2010, Hobby Lobby executed an agreement to purchase over 5,500 Artifacts, comprised of cuneiform tablets and bricks, clay bullae and cylinder seals, for $1.6 million. The acquisition of the Artifacts was fraught with red flags. For example, Hobby Lobby received conflicting information where the Artifacts had been stored prior to the inspection in the UAE. Further, when the Artifacts were presented for inspection to Hobby Lobby’s president and consultant in July 2010, they were displayed informally. In addition, Hobby Lobby representatives had not met or communicated with the dealer who purportedly owned the Artifacts, nor did they pay him for the Artifacts. Rather, following instructions from another dealer, Hobby Lobby wired payment for the Artifacts to seven personal bank accounts held in the names of other individuals.

With Hobby Lobby’s consent, a UAE-based dealer shipped packages containing the Artifacts to three different corporate addresses in Oklahoma City, Oklahoma. Between one and three shipments arrived at a time, without the required customs entry documentation being filed with CBP, and bore shipping labels that falsely and misleadingly described their contents as “ceramic tiles” or “clay tiles (sample).” . After approximately 10 packages shipped in this manner were received by Hobby Lobby and its affiliates, CBP intercepted five shipments. All of the intercepted packages bore shipping labels that falsely declared that the Artifacts’ country of origin was Turkey. No further shipments were received until September 2011, when a package containing approximately 1,000 clay bullae from the same purchase was received by Hobby Lobby. It was shipped by an Israeli dealer and accompanied by a false declaration stating that the bullae’s country of origin was Israel.

The government’s case is being handled by Assistant United States Attorneys Karin Orenstein and Ameet B. Kabrawala.