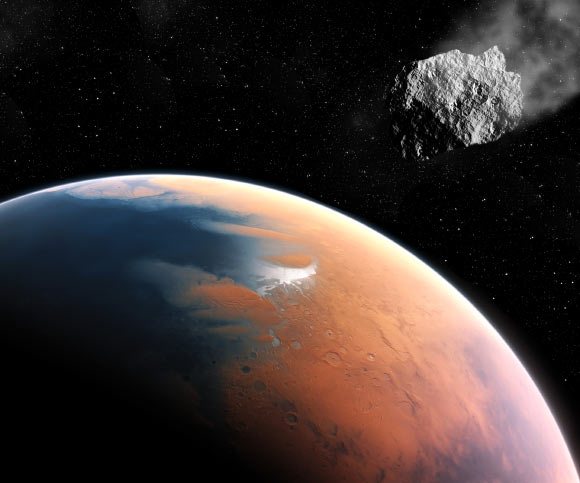 Mars experienced a single colossal impact during its first 130 million years, the equivalent to the largest body in the today’s asteroid belt slamming into the red planet. This is the result of models developed by researchers at the University of Colorado Boulder and the Tokyo Institute of Technology, who propose such a collision can account for the surprising chemistry of recovered Martian meteorites and even the formation of its moons.

Evidence for colossal impacts on ancient Mars can be found both on its surface and further down within its crust.

Since the 1960’s Mariner missions we have known Mars as a two-faced world, split by hemispheres more different than for any other body in our solar system. Whilst two thirds of the red planet is cratered and ancient, the low lying northern polar region is smooth as a result of later volcanic resurfacing.

Various explanations have been suggested for this crustal dichotomy. These include a hypothesized mega-impact striking either the northern hemisphere, with the lowlands representing the largest impact crater discovered in our solar system, or the south with a strike that melted the entire hemisphere.

More evidence has been delivered to our planet from space.

The 2011 recovery of the 4.43 billion year old Black Beauty meteorite from the Sahara gave scientists a close up look further back into Mars history than ever before.

As with many younger Martian meteorites, they once again found higher than expected concentrations of siderophile elements, a group of high-density metals including gold and platinum which should have sunk towards the core during Mars’ crustal separation.

The elevated concentrations in Black Beauty suggested an external top up very early on in Mars history.

On Earth we also see elevated siderophile concentrations in our mantle. Proponents of the Late Veneer hypothesis believe these can be explained by meteorite impacts after the Earth’s core had formed.

Ramon Brasser from the Tokyo Institute of Technology suggested last year that rather than a series of impacts, a single moon-sized impactor could alone explain the additional siderophiles.

Now Brasser and Steve Mojzsis from Colorado wanted to find out what type of cataclysmic event could explain Mars’ crustal dichotomy and internal chemistry.

To do so, they created a model of Mars during this same late veneer period, and surrounded it with a population of leftover planetesimals ranging in size from 1 km to 2,000 km with a size-frequency distribution identical to that of today’s asteroid belt.

“This last sweep up of planetary embryos is a frequently neglected period, a kind of dark ages between the time Earth’s moon formed and when we see the first inklings of crust on the inner planets,” says Mojzsis. “It was an era defined by colossal impacts that added supplementary mass to the planets.”

Brasser and Mojzsis ran simulations of planetesimal impact until they were able to reproduce the chemical properties inferred from the Martian meteorites.

Their results, published in the journal Geophysical Research Letters, showed that Mars’ late accretion budget also required just a single impact. This cataclysmic event, which occurred before ca. 4430 Ma, must have involved a body 1,200 km across.

“The impact we describe would be equivalent to the largest member of the present day asteroid belt impacting the red planet,” adds Mojzsis.