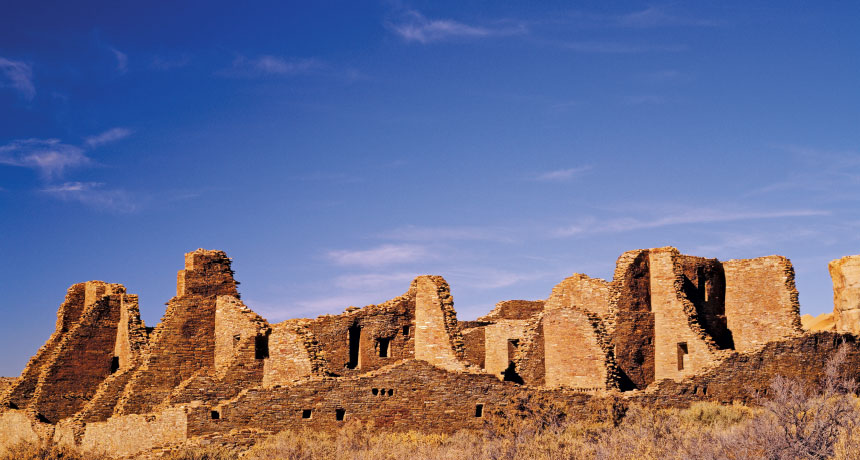 Chaco Canyon is a land of extremes. Summer heat scorches the desert canyon, which is sandwiched between sandstone cliffs nearly two kilometers above sea level in New Mexico’s northwestern corner. Bitter cold sweeps in for winter. Temperatures can swing as many as 28 degrees Celsius during the course of a day. Through it all, Chaco Canyon maintains a desolate beauty and a craggy pride as home to one of ancient America’s most enigmatic civilizations.

Scientists have struggled to understand Chaco society since its first excavations in the late 1800s. Who first settled Chaco Canyon around 1,200 years ago is still a mystery. Many researchers suspect that it took a few hundred years for a fledgling city-state run by an elite social class to emerge. Political and cultural ties between the ancient society and Chaco-style communities outside the canyon also perplex. Then there’s the puzzle of how people survived from about 800 to around 1300 on the rough, parched terrain.

A new generation of Chaco studies and discoveries is under way, partly thanks to a young researcher’s skeleton reassembly project. This jigsaw job required a lot of travel, but not to Chaco Canyon.

That’s because bones of people excavated at Chaco in the 1890s and 1920s were packed away in boxes and drawers at museums in New York City, Chicago and Washington, D.C. Kerriann Marden visited all of these places to retrieve far-flung body parts from one site in particular — Pueblo Bonito, the oldest and largest of a dozen huge stone great houses in Chaco Canyon. The structure was built, along with a range of smaller structures, between about 800 and 1130.