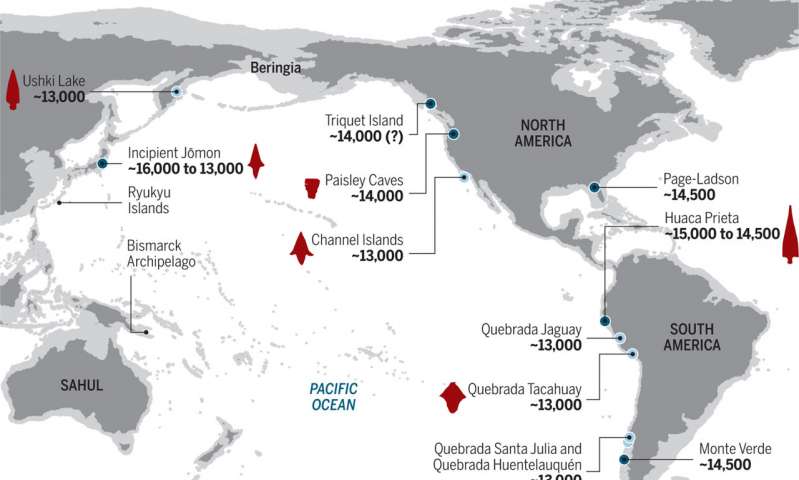 As the authors note, for most of the last century, the accepted theory of humans’ first arrival was via the land bridge in what is now the Bering Strait—at the time, sea levels would have been much lower. Those early settlers, named the Clovis people, were theorized to have traveled down a central ice-free corridor into what is now the U.S. approximately 13,500 years ago. But, as the authors also note, evidence since the late 1980s has shown that there were people living in parts of the Americas long before the time of the Clovis migration. Archaeological evidence of people living on islands off of Asia and on the North and South American coasts (some as far south as Chile) has been found going as far back as 14,000 to 18,000 years ago. Evidence has also been found of people living in the North American interior as far back as 16,000 years ago.All this new evidence, the authors report, has caused most experts in the field to abandon the idea of the Clovis people as the first to arrive. Most now believe that the first people to arrive did so by boat rather than walking, and they did it by following the coasts, not through the interior. This would have been possible, the authors note, because of what has come to be known as the kelp highway—kelp forests growing just offshore. All that kelp, it has been noted, would have provided a rich habitat for sea creatures upon which hearty travelers could feast.The authors conclude by noting that too little research has been done offshore—the early travelers would have been residing mostly on land that is now covered by the sea due to higher worldwide ocean levels. If the scientific community truly wants to learn more about human migration to the Americas, they suggest, more work needs to be done offshore.

Summary
For much of the 20th century, most archaeologists believed humans first colonized the Americas ∼13,500 years ago via an overland route that crossed Beringia and followed a long and narrow, mostly ice-free corridor to the vast plains of central North America. There, Clovis people and their descendants hunted large game and spread rapidly through the New World. Twentieth-century discoveries of distinctive Clovis artifacts throughout North America, some associated with mammoth or mastodon kill sites, supported this “Clovis-first” model. North America’s coastlines and their rich marine, estuarine, riverine, and terrestrial ecosystems were peripheral to the story of how and when the Americas were first settled by humans. Recent work along the Pacific coastlines of North and South America has revealed that these environments were settled early and continuously provided a rich diversity of subsistence options and technological resources for New World hunter-gatherers.