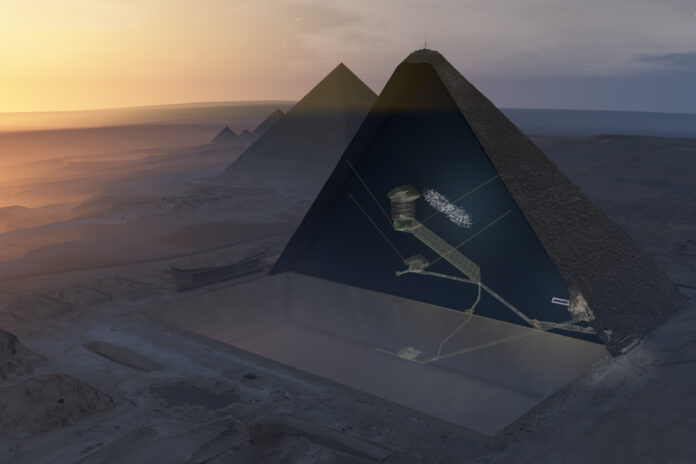 by Rachel Becker
The newly-discovered cavity sits near the center of the pyramid, but its function is still a mystery

A shower of subatomic particles has revealed the outlines of an empty cavity inside the Great Pyramid at Giza in Egypt — the first discovery of a new internal structure in almost two centuries. Scientists don’t know exactly what it is yet, or why it’s there. But the finding might help solve the mystery of how an ancient civilization constructed this imposing monument 4,500 years ago.

The pyramids jutting out of Egypt’s Giza plateau are obvious landmarks — but even after millennia, their dark interiors remain mysterious. Now, using a technique similar to an X-ray, researchers have discovered an empty cavity inside the largest pyramid of them all: the Great Pyramid — built for the pharaoh Khufu, also known as Cheops, between 2509 and 2483 BCE. The discovery, described today in the journal Nature, is the latest finding from the ScanPyramids mission, an international effort to spy inside these ancient stone structures without drilling any holes.

Dubbed the “Big Void,” this newly discovered space near the center of the pyramid stretches almost 100 feet long. It’s located just above a huge internal corridor called the Grand Gallery, one of the many passages that connect the two large rooms inside the pyramid, called the Queen’s chamber and the King’s chamber.

The research team found it by tracking particles called muons. Muons are produced when the cosmic rays that permeate our Universe and pummel our atmosphere break down — creating a kind of subatomic confetti that rains down on Earth at almost the speed of light. These particles drift through air more easily than they pass through solid objects like stone. So by analyzing how many muons travel through a massive object like a pyramid, scientists can detect internal gaps and spaces. It’s similar to how X-rays, which are used to image the inside of our body when you break a bone, work. The method has been used to see inside volcanoes, nuclear reactors at Fukushima, and now, the Great Pyramid at Giza.

The technique is pretty low resolution, so many questions remain: the researchers don’t know whether the Big Void is perfectly horizontal, or tilted, whether it’s one big empty space or several smaller, adjacent rooms, and why it’s in the pyramid.

“What we are sure about is that this big void is there, that it is impressive, and that it was not expected by any kind of theory,” said study co-author Mehdi Tayoubi from the Heritage, Innovation, and Preservation Institute, in a press briefing. Tayoubi suspects that the Big Void’s presence is no accident of construction or decay; it was built intentionally, just not by aliens, Tayoubi said. “This pyramid is perfect,” he said. “Maybe that’s why people are still dreaming about this pyramid.”

Next, the researchers plan to design a robot that could somehow squeeze into the pyramid to explore this new space. “This mission is about better understanding the pyramids,” Tayoubi said. “But above all, it’s about innovation.”