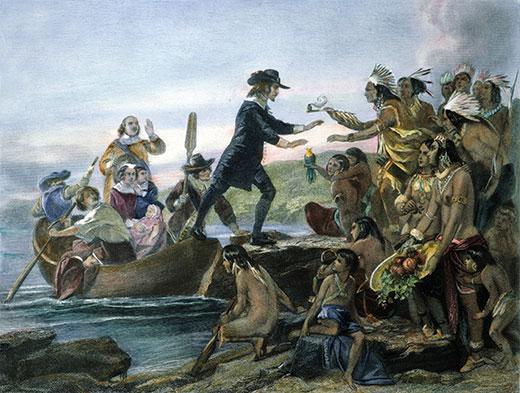 The Thanksgiving Day Celebration Originated From a Massacre

In 1621, though Pilgrims celebrated a feast, it was not repeated in the years to follow. In 1636, a murdered white man was found in his boat and the Pequot were blamed. In retaliation settlers burned Pequot villages.

Additionally, English Major John Mason rallied his troops to further burn Pequot wigwams and then attacked and killed hundreds more men, women and children. According to Mason’s reports of the massacre, “We must burn them! Such a dreadful terror let the Almighty fall upon their spirits that they would flee from us and run into the very flames. Thus did the Lord judge the heathen, filling the place with dead bodies.”

The Governor of Plymouth William Bradford wrote: “Those that escaped the fire were slain with the sword; some hewed to pieces, others run through with their rapiers, so that they were quickly dispatched and very few escaped. It was conceived they thus destroyed about 400 at this time. It was a fearful sight to see them thus frying in the fire…horrible was the stink and scent thereof, but the victory seemed a sweet sacrifice, and they gave the prayers thereof to God, who had wrought so wonderfully for them.”

The day after the massacre, William Bradford who was also the Governor of Massachusetts Bay Colony, wrote that from that day forth shall be a day of celebration and thanks giving for subduing the Pequots and “For the next 100 years, every Thanksgiving Day ordained by a Governor was in honor of the bloody victory, thanking God that the battle had been won.”

Native Americans and the Pilgrims Were “Besties”

The above statement is straight from the mouth of a fifth-grader at Long Elementary School in Ohio, who stated the Indians (Wampanoag) and Pilgrims were not “besties” or best friends. True to this statement, the pilgrims in Massachusetts were far from friendly. Soon after arriving in Plymouth, Massachusetts, Pilgrims went into Indians’ dwellings and cornfields and took whatever they wanted leaving beads behind. But that isn’t the picture that is painted by many accounts of the first Thanksgiving.

According to one colonist’s account in Lies My Teacher Told Me: Everything Your American History Textbook Got Wrong by James Loewen: “The next morning we found a place like a grave. We decided to dig it up. We found first a mat, and under that a fine bow… We also found bowls, trays, dishes, and things like that. We took several of the prettiest things to carry away with us, and covered the body up again.”

The Pilgrims settled in an area that was once Patuxet, a Wampanoag village, but it had been abandoned four years prior because of a deadly outbreak of a plague brought by European traders. Before 1616, the Wampanoag numbered 50,000 to 100,000, occupying 69 villages scattered throughout southeastern Massachusetts and eastern Rhode Island. The plague, however, killed thousands, up to two-thirds, of them. Many also had been captured and sold as slaves.

This is a popular image of the first Thanksgiving, a painting by Jean Leon Gerome Ferris. But this is definitely NOT what happened.

Native Americans and Pilgrims Came Together to Give Thanks and Celebrate

In 1621, when the Pilgrims were celebrating a successful harvest, they were shooting guns and cannons into the air. The Wampanoag chief and 90 warriors made their way to the settlement in full warrior mode—in response to the gunfire. As the Huffington Post’s Richard Schiffman puts it, “It remains an open question, however, whether the Wampanoag were actually invited, or if they crashed the party.”

The Pilgrims were most likely nervous—the Wampanoag outnumbered the Pilgrims two to one, but it certainly wasn’t the happy picture put forth in many history books. According to Mashpee Wampanoag Tribal Historic Preservation Officer Ramona Peters, “It was Abraham Lincoln who used the theme of Pilgrims and Indians eating happily together. He was trying to calm things down during the Civil War when people were divided. It was like a nice unity story.”

They Ate Turkey, Sweet Potatoes and Cranberry Sauce at the First Thanksgiving

According to many historical accounts, there is no proof of turkey gobbling at the 1621 meal, but there was wild fowl (most likely geese or duck). Sweet potatoes were not yet grown in North American and cranberries are not a likely dessert food because sugar was an unaffordable luxury. Other items on the table included such things as venison, pumpkin, succotash and Indian corn.

A typical Thanksgiving dinner today includes turkey, cranberry sauce and sweet potatoes. But this could not have been what was served traditionally.

Many have heard the story of the friendly Indian Squanto who learned English from fishermen and later taught the Pilgrims how to plant corn and other vegetables. But what many history books don’t share is that Squanto was kidnapped as a boy and sold into slavery in Spain. After several years, Squanto struggled to get back to Cape Cod.

When he returned to his village, he discovered he was the only member of his tribe that remained—the rest were either killed in battle or died of disease during his absence.

Another myth here would be to note that Squanto did not learn English solely to help the colonists—it was a necessity to facilitate his escape so he could return home.

The Pilgrims did not introduce the sentiment of Thanksgiving to the Indians. According to Loewen, “Thanksgiving is full of embarrassing facts. The Pilgrims did not introduce the Native Americans to the tradition; Eastern Indians had observed autumnal harvest celebrations for centuries. Our modern celebrations date back only to 1863; not until the 1890s did the Pilgrims get included in the tradition; no one even called them ‘Pilgrims’ until the 1870s.”

June 25, 2017
Mohenjo Daro is threatened by the baking temperatures of the Indus Valley and the threat from tourists and terroristsArchaeologists are trying to save the...