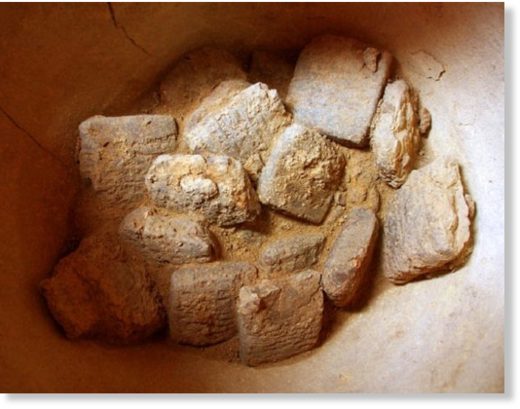 Excavations led by a University of Tübingen archaeologist at the site of a recently-discovered Bronze Age settlement in the Kurdistan region of Iraq have uncovered almost 100 clay tablets dating back to the period of the Middle Assyrian Empire (1250 BC).

The cache of clay tablets was found at the archaeological site of the ancient city of Bassetki, which was discovered in 2013 by University of Tübingen Professor Peter Pfälzner and colleagues.

“Our finds provide evidence that this early urban center in northern Mesopotamia was settled almost continuously from approximately 3000 to 600 BC,” Professor Pfälzner said.

“That indicates that Bassetki was of key significance on important trade routes.”

According to the team, in one of Bassetki’s ancient buildings, 93 clay tablets were excavated. Many of the tablets are unbaked and badly worn, so reading them will be a major challenge.

“Sixty of the valuable records had been deposited in a ceramic pot which was presumably used for clay tablet storage,” the archaeologists said.

“The vessel was discovered in a room of a Middle Assyrian building which had been destroyed; along with two further pots, it has been wrapped in a thick coating of clay.”

“The vessels may have been hidden this way shortly after the surrounding building was destroyed. Perhaps the information inside it was meant to be protected and preserved for posterity,” Professor Pfälzner said.

“It is not yet known if the tablets contain business, legal, or religious records.”

“Our philologist, Dr. Betina Faist, deciphered one small fragment of a clay tablet. It mentions a temple to the goddess Gula, suggesting that we may be looking at a religious context.”

“I hope the texts will yield a wide variety of detail about the history, society, and culture of this little-researched area of northern Mesopotamia in the second millennium BC,” he added.

August 29, 2017
By: Mona AhmedCAIRO - Khaled Al-Anani; Minister of Antiquities and Mohamed Badr, governor of Luxor, announced the discovery of a new archaeological necropolis in...