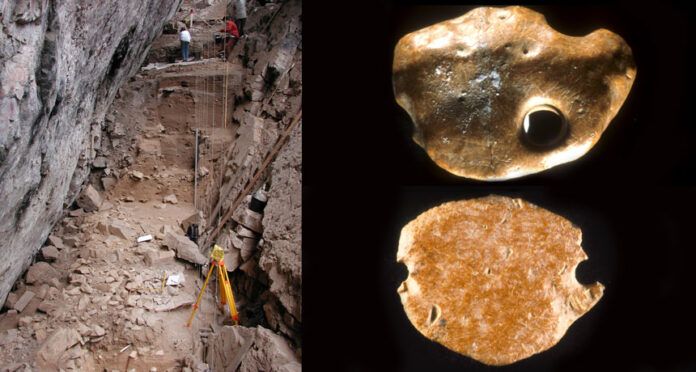 People hunted giant sloths in the center of South America around 23,120 years ago, researchers say — a find that adds to evidence that humans reached South America well before Clovis hunters roamed North America roughly 13,000 years ago.

Evidence of people’s presence at Santa Elina rock shelter, located in a forested part of eastern Brazil, so long ago raises questions about how people first entered South America. Early settlers may have floated down the Pacific Coast in canoes before heading 2,000 kilometers east to the remote rock shelter, or they might have taken an inland route from North America, archaeologist Denis Vialou of the National Museum of Natural History in Paris and his colleagues report in the August Antiquity. Other South American sites reportedly occupied by Stone Age humans lie much closer to the coast than Santa Elina does.

Excavations at Santa Elina from 1984 to 2004 revealed three sediment layers containing numerous stone artifacts and bones of giant sloths called Glossotherium. Sloth remains included small, bony plates from the skin that humans made into ornaments of some kind by adding notches and holes. Sediment layers also contained remains of hearths.

Three dating methods, applied to charcoal particles, sediment and sloth bones, indicate that people first reached Santa Elina more than 20,000 years ago. Humans again visited the rock shelter from around 10,120 to 2,000 years ago, the researchers say.

September 11, 2017
Clay tablets dating back 4,000 years show the beginnings of writing and literacy in ancient Anatolia, in the middle of modern-day Turkey, according to...