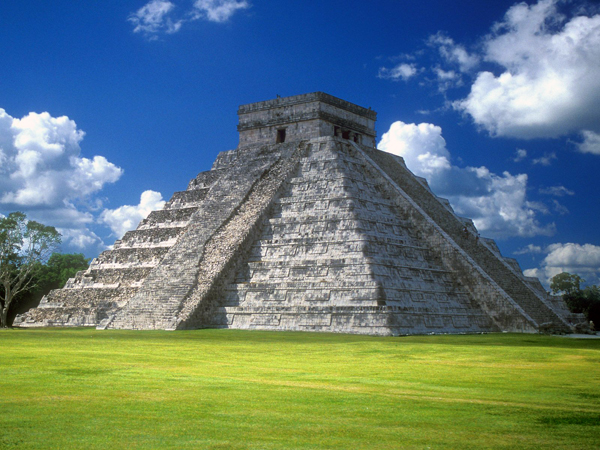 Chichén Itzá, MexicoAt the spring and fall equinoxes, the setting sun casts serpent-like shadows along the northern stairs of El Castillo, or “the castle.” Built more than a thousand years ago by the ancient Maya, the pyramid towers 100 feet over the ruins of Chichén Itzá, a World Heritage site and popular tourist destination on Mexico’s Yucatan Peninsula.

Adventurers and archaeologists have explored the ruins for more than a century, but mysteries endure. Is there a watery labyrinth beneath the great pyramid, as local legends hint? Are there hidden chambers in the heart of the monument, as some archaeologists suspect?

Seeking clues, a multidisciplinary team of scientists and engineers is launching the first comprehensive investigation of Chichén Itzá in 50 years.

“Something on this scale has never been attempted, but we’re confident that it will help us understand this site in a way that wasn’t possible before,” says Guillermo de Anda, an underwater archaeologist with Mexico’s National Institute of Anthropology and History and director of the Great Maya Aquifer Project. “With this data, I believe we will conclusively find out if the local legends of an elaborate underworld are true.”

The site’s Maya inhabitants considered caves, tunnels, and natural sinkholes called cenotes to be thresholds to the realm of the gods, says de Anda, a National Geographic Emerging Explorer. “They believed that everything from fertility to rain and lightning originated in this subterranean world. The clues they left behind make it clear that they went to great lengths to appease and appeal to the dwellers of this spirit world.”

Those lengths often included human sacrifice. De Anda examined hundreds of human bones found in the Sacred Cenote (sometimes called the Well of Sacrifice) at Chichén Itzá and found evidence of unhealed wounds and fractures that would have occurred at or near the time of death.

Early archaeologists and treasure hunters at Chichén Itzá and elsewhere often damaged ancient sites to collect and remove artifacts. The new low-impact technology, most of it built or adapted by engineers at National Geographic, allows researchers to locate and study artifacts without disturbing or removing them from their environment.

During the ambitious, multiyear project, the team will use specially modified, ground-penetrating radar (GPR) to locate hidden passageways and peek behind interior walls of El Castillo. The team will also employ GPR and other remote imaging technology to identify and map tunnels and caves around the pyramid and elsewhere.

An estimated 3,000 cenotes remain hidden beneath the forest canopy in southern Mexico, many harboring clues about ancient Maya civilization. The team will use drone-mounted LIDAR (light detection and ranging) and thermal sensors to penetrate the dense foliage and locate the natural sinkholes.

The researchers will also use kayak-mounted sonar to explore known cenotes and locate underwater entrances to caves and tunnels that would have been accessible when the water table was much lower. By mapping the movement of water through subterranean passages beneath the site, they hope to identify connections between underground systems that are referenced in Maya oral history but never confirmed.