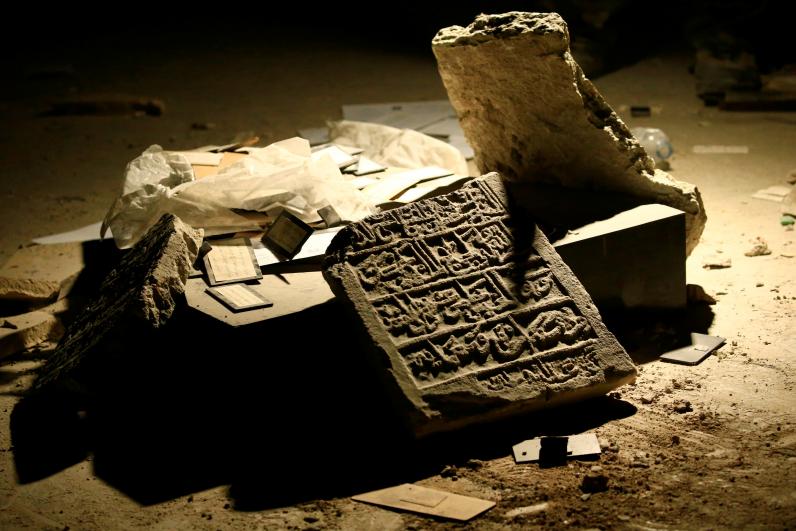 The Islamic State militant group (ISIS) makes as much as $100 million annually by trafficking looted antiquities out of Iraq and Syria and selling them on the black market.

The Wall Street Journal reported that while it was not possible to put a precise figure on the amount of revenue generated for ISIS by the trade of the artifacts, an unnamed French security official believed it to be around $100 million. Estimates from other sources ranged from the low tens of millions upward.

The trade in items stolen from Iraq and Syria’s historical sites has become important to the militant group, as its territory, and by extension its ability to count on oil revenues, dwindles. “ISIS is increasing pressure on this line of trafficking to compensate for the loss of petroleum revenue,” the French security official was quoted by the Journal as saying.

A destroyed artifact in a museum, where Islamic State militants in 2015 filmed themselves destroying priceless statues and sculptures during a battle against militants in Mosul, Iraq, on March 11.

For many Syrian traders and smugglers deprived from the country’s six-year civil war, selling the antiquities has become a necessity. One so-called middleman, Muhammad Hajj Al-Hassan, described how ISIS overran his home in Syria and nearly executed him on suspicion of his sympathy for the Free Syrian Army (FSA). He later reluctantly began trading artifacts for ISIS to European buyers at the request of Abu Laith Al-Dairi, the group’s head of antiquities.

The importance ISIS places on the trade of antiquities is reflected in the group’s use of foreign jihadis to manage its operation. The cadre of international fighters is considered more loyal than their local counterparts.

Locals are given licenses by ISIS to dig for antiquities. Their licenses were initially free, but now the group charges 20 percent of the value of each object evacuated. ISIS demands that all discovered items be resold directly to the militant group itself; it then reaches out to dealers.

Hassan described how he had recently sold two antique Bibles for $11,800 to a Russian buyer in a city in southern Turkey. The Bibles from eastern Syria were then smuggled out of Turkey, hidden in a truck filled with vegetables. Hassan kept a commission of 25 percent for facilitating the sale. The rest of the profits were given to the trader who had transported the Bibles to Turkey.

Another middleman described how he paid $1,000 to a Syrian woman who carried a bronze Roman statue across the border between Syria and Turkey. The piece had come from Raqqa and may have been a fake.

In July, Oklahoma City–based Hobby Lobby was fined $3 million over its illegal purchase of artifacts believed to have been stolen in 2010 and smuggled from Iraq. “In December 2010, Hobby Lobby executed an agreement to purchase over 5,500 artifacts, comprised of cuneiform tablets and bricks, clay bullae and cylinder seals, for $1.6 million,” the Department of Justice said in a statement at the time. “The acquisition of the artifacts was fraught with red flags.”

More: ISIS MAKES UP TO $100 MILLION A YEAR SMUGGLING ANCIENT ARTIFACTS FROM IRAQ AND SYRIA