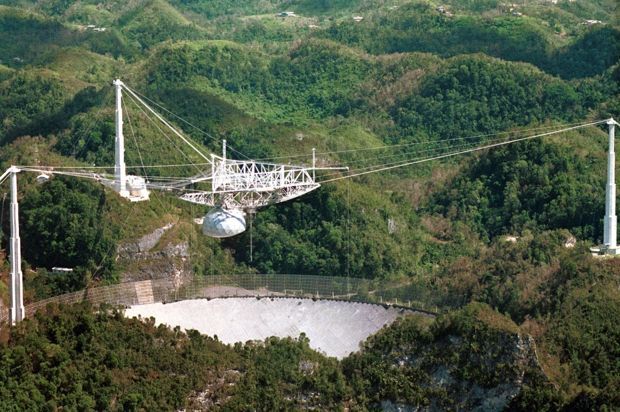 STARGAZERS have received “some very peculiar signals” while observing a distant dwarf star.

Experts listening in at the Arecibo Observatory were on a planet-spotting mission when the strange “pulses” came over the radio between April and May.

However, while boffins have not ruled out the possibility that the signals were produced by aliens, it’s not currently the top theory about their origin.

Ross 128 is a small red dwarf that is the 12th closest star to Earth – which makes it very close indeed when compared to the billions and billions of other suns out there in the universe.

“We believe that the signals are not local radio frequency interferences (RFI) since they are unique to Ross 128 and observations of other stars immediately before and after did not show anything similar,” wrote Professor Abel Mendez in a blogpost last week.

The planetary astrobiologist and NASA fellow who is based at the University of Puerto Rico believes there could be three explanations for the strange noises.

One possibility is a series of solar flare emissions from the star.

They could be also be emissions from another object which is in the field of view of Ross 128 (GJ447).

The third solution suggests we might be to blame for it.

Soaring space junk or a stray satellite might have burst onto the radar, Professor Mendez suggested.

However, alien hunters will be pleased to learn it could be a bunch of extra-terrestrials hoping to get in touch – a possibility Mendez said he couldn’t rule out.

But he was quick to point out was “at the bottom of [a list of] many other better explanations”.

“Therefore, we have a mystery here and the three main explanations are as good as any at this moment,” he concluded.

They were given extra time to observe the dwarf planet yesterday evening – but their findings have yet to be announced.

The Puerto Rican observatory is one of the world’s largest and was seen in the Bond classic GoldenEye.

It’s tasked with guarding our planet against the threat of wayward asteroids and studying remote planets in our universe.

Scientists picking up deep space signals have been hearing several “alien” noises from afar, which are known as “fast radio bursts”.

The discovery of these signals has prompted many stargazers to speculate about whether ET really is phoning our home.

What are Fast Radio Bursts (FRBS)?

More: ‘Strange’ signals that appear to be coming from a star close to Earth may have been sent by ALIENS, scientists say

August 9, 2017
By MIKE MCRAESigns of a culture that disappeared without a trace seven centuries ago have now been found in a rather unusual place –...