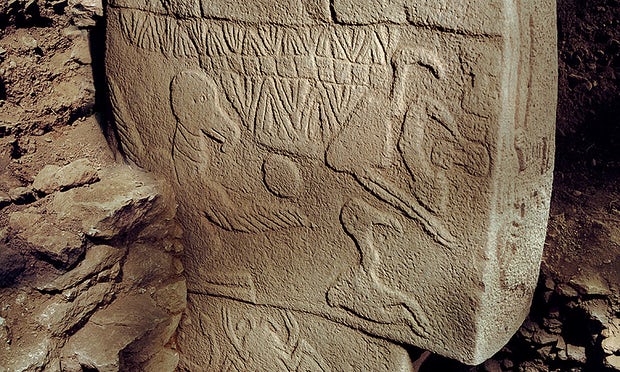 Fragments of carved bone unearthed at an ancient site on a Turkish hillside are evidence that the people who spent time there belonged to a neolithic “skull cult” – a group that embraces rituals around the heads of the dead.

The remains were uncovered during field work at Göbekli Tepe, an 11,000-year-old site in the south-east of the country, where thousands of pieces of human bone were found, including sections of skulls bearing grooves, holes and the occasional dab of ochre.

Pieces of three adult skulls recovered from the sitehave hallmarks of being carved with flint after being scalped and defleshed first. Evidence that the latter was not always an effortless affair is found in multiple scrape marks where the muscles once attached to the bone.

But the intentional carvings look very different to other marks on the skulls. “The carvings are very deep lines in the bone and are definitely intended,” said Julia Gresky at the German Archaeological Institute in Berlin. “It’s the first evidence we have for carved human skulls anywhere.”

The scientists discovered the bits of skull in two trenches at the 300 metre-wide site on a hilltop about 30 miles (50km) north of the Syrian border. Excavations which began at the site in the mid-1990s uncovered eight large oval buildings there. At the centre of each stand two T-shaped pillars which resemble people rising to more than 5 metres high. Smaller pillars of the same design are built into the walls.

The grooves and holes cut purposefully into skulls are far less ornate than the beautiful carvings of people and animals that decorate limestone pillars at the site, leading scientists to suspect that they were not for show, but instead helped others to string the skulls up with cord.

Those who spent time at the site – there is little evidence people lived there – may have commemorated their ancestors by suspending their skulls, or displayed the skulls of their enemies. “They think the power from the dead is going to the living,” said Gresky. 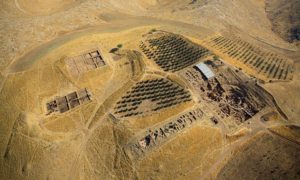 Other artefacts found at the site support the suspicion that those who frequented Göbekli Tepe had a special relationship with the skulls of others. One carving found on a pillar at the site shows a human who has just lost their head. Meanwhile, figurines hold heads as apparent gifts or have been decapitated themselves, according to a report in Science Advances.

One skull found at the site has a hole in the right position that would allow it to hang level if suspended. Meanwhile, the grooves would prevent cord from slipping when it was tied around a skull to prevent the lower jaw from falling off when it is hung up. “It allows you to suspend it somewhere as a complete object,” she said.

The site dates to a time when people were in transition from hunter-gatherers to farmers. The people of Göbekli Tepe had not domesticated plants or animals, but settled in the area, and used what resources they found around them.

Lee Clare, another scientist on the study, said that the shift towards settled life will have brought on new challenges as the population grew. The site itself would have served to build the group’s collective identity, one which could have been bolstered by the rituals of the skull cult.