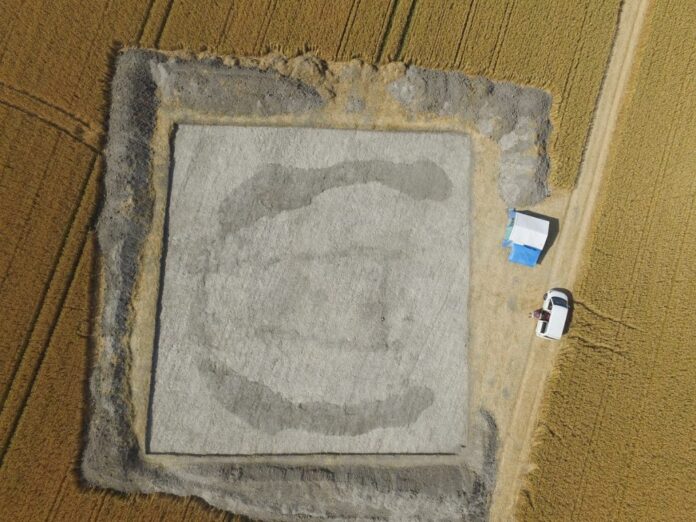 A ‘House of the Dead’ has been discovered in Wiltshire dating back 5,000 years by University of Reading archaeologists and students, and could contain the ancestors of those who lived around Stonehenge and Avebury.

As part of the University’s final Archaeology Field School in the Pewsey Vale, students and staff, with the support of volunteers from the area, have investigated the site of a Neolithic long barrow burial mound in a place known as Cat’s Brain – the first to be fully investigated in Wiltshire in half a century.

The monument, which predates nearby Marden Henge by over 1,000 years, may contain human remains buried there in around 3,600 BC. The monument was first spotted by aerial photography and followed up by geophysical survey imagery.

Dr Jim Leary, Director of the Archaeology Field School, said: “Opportunities to fully investigate long barrows are virtually unknown in recent times, and this represents a fantastic chance to carefully excavate one using the very latest techniques and technology.

“Members of the public now have the chance to visit us and see prehistory being unearthed as we search for human remains on the site. Discovering the buried remains of what could be the ancestors of those who lived around Stonehenge would be the cherry on the cake of an amazing project.”

The Cat’s Brain long barrow, found in the middle of a farmer’s field halfway between the iconic prehistoric monuments of Avebury and Stonehenge, consists of two ditches flanking what appears to be a central building. This may have been covered with a mound made of the earth dug from the ditches, but has been ploughed flat over many centuries.

The monument dates to the early Neolithic period – an era representing the earliest agricultural communities in Britain, and the first monument builders. The last long barrow to be fully investigated in Wiltshire was in the 1960s.

Having cleared the top soil, the clear outline of the long barrow ditches is visible, as well as the footprint of the building. The team will now conclude the three-year Archaeology Field School project by excavating the archaeological remains and recover artefacts, bones, and other environmental evidence, which will be analysed.

This analysis will provide crucial evidence for the people and society in Britain during this remote period.

In addition to the Cat’s Brain long barrow site, the University of Reading’s Archaeology Field School is working at Marden henge, the largest henge in the country, built around 2,400 BC, also within the Vale of Pewsey. Little archaeological work has been carried out in the Vale, especially compared with the well-known nearby sites of Avebury and Stonehenge. The project aims to fill this gap in our knowledge and highlight the importance of the area in the Neolithic period.

Amanda Clarke, co-director of the Archaeology Field School, said: “This incredible discovery of one of the UK’s first monuments offers a rare glimpse into this important period in history. We are setting foot inside a significant building that has lain forgotten and hidden for thousands of years.”

An Open Day will be held at Marden henge on Saturday 15 July to allow members of the public to see the excavation happening live, as the team searches for human remains and other artefacts.

More: Ancient ‘House of the Dead’ discovered in Wiltshire